“My parents had a small collection of albums, Herb Alpert, Barbara Streisand, the popular music of the sixties, but among those records was one of Segovia’s greatest albums. It was called “An Andres Segovia Concert” on the Decca Label, released when Segovia was in his forties and at the height of his power. It had Villa-Lobos, Fernando Sor and Bach, and I listened with amazement. I’d heard The Beatles and Bob Dylan play guitar but nothing like this. Segovia sounded like a little orchestra; there was counter-point, dynamics, timbre changes, more music than I thought was possible from a guitar. I was captivated. I asked for a classical guitar for Christmas and once in my hands I never looked back. Complete devotion. I never regretted it. I began practicing three hours a day. I took lessons from Michael Fowler who had studied with Christopher Parkening. I was hooked.”

But making a living as a guitarist, especially a classical guitarist, was challenging. So Steve began studying jazz. He had no interest in electric guitar, but he was inspired by Charlie Byrd and his recordings of Brazilian music all performed on classical guitar. In 1980 Steve moved to the Twin Cities and began playing jazz with other musicians. He also began teaching, at first specializing in working with children. He soon had fifty students and by also playing music for weddings and corporate parties he found he could make a living. Steve taught at The West Bank School of Music, The Podium Music Store and finally Minneapolis Community and Technical College where he taught for twenty seven years. Steve also began to write his own music and in 1990 recorded his first album: Boundary Waters.

“I was inspired by the Northern Lakes and I wrote soft instrumental pieces for guitar, violin, flute and hand percussion that reflected this love of nature.”

It sold well so Steve followed up with “Mississippi Goin’ By” featuring Clint Hoover on chromatic harmonica and Mark Briere on mandolin and a few years later released Autumn Road, fiddle music inspired by Jay Unger. After 32 years perforn1ing and teaching in Minneapolis Steve decided to move to Austin, Texas.

Austin is the “performing music capitol of the world.” Steve had heard this slogan and was intrigued enough to visit Austin during South by Southwest.

“I was amazed by the number of venues in Austin. There’s music everywhere. The local musicians are excellent and friendly. I knew Austin was a place I wanted to live.”

He found the most exciting area to be South Congress Ave, and while exploring noticed a line in front of the legendary Continental Club.

“Toni Price was performing and she was an amazing singer but it was her violinist that really caught my ear.”

Warren Hood, son of Austin legend violinist, Champ Hood, had been playing since childhood and “the moment I heard him I wanted to play with him.” Steve packed up a U-haul and hit the road.

“I thought it would be years before I could find folks to perform with. I mentioned to my new neighbors I was a guitarist and they said they knew a flutist named Sarah Jane Hargis. I gave her a call, we rehearsed, and she said, ‘What are you doing tomorrow?” We did a gig the next day. I couldn’t believe it. After five years, Sarah Jane and I are still playing music.”

Steve wanted to record and asked other musicians who was their favorite percussionist. The answer was always James Fenner.

“I asked James, Sarah Jane and Warren to record and Avenue B was born. I’ve now lived in Austin for over five years, I have a new album, I’m playing with the best guys in town. I’m very happy here in the “Performing Music Capitol of the World.” 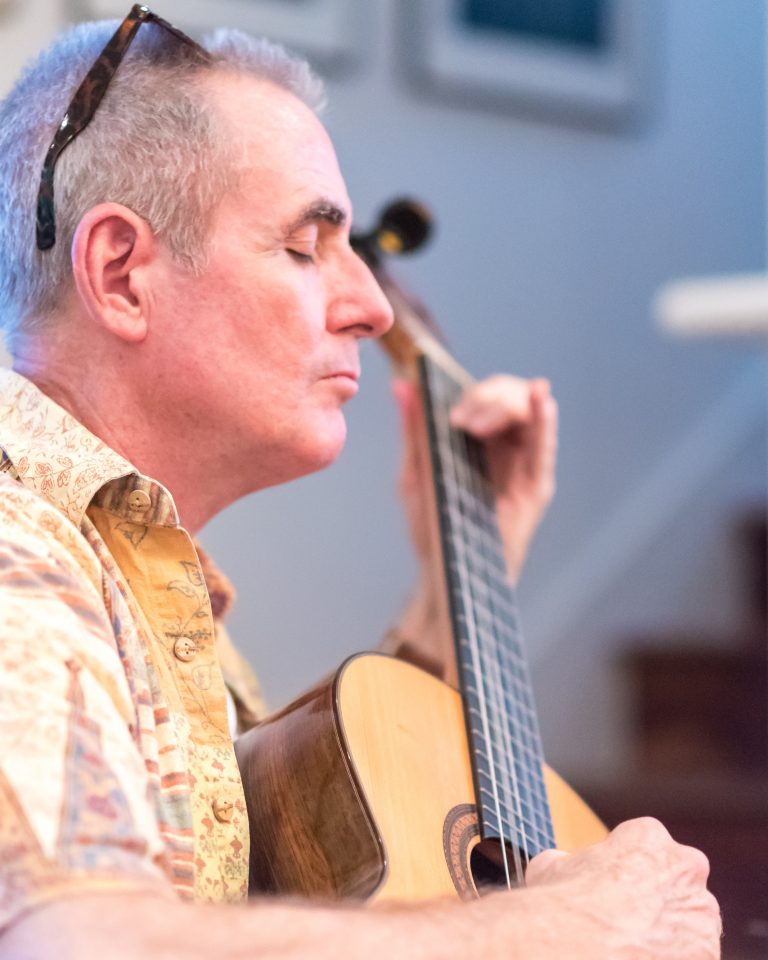